The System Can’t Fix the System 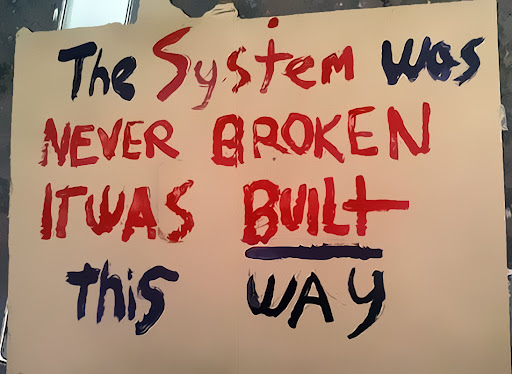 Those were the two key observations the Rev. Rosa Lee Harden, the leader of Faith+Finance, came back with after our team’s trip to Indianapolis last week. We hope to put on a conference there next Spring, and we have already started working with several partners there as we complete work on our Field Guide to Transformation, which will be up available online in the near future. The Field Guide is presented as a series of chapters, with sidebar stories and videos, on our method of community engagement which is designed as a way for the Christian church to reengage with their local economy.

This first version of the Field Guide is focused on helping people of faith be effective, chiefly in the white church, starting with the Episcopal Church where Rosa Lee has connections, become culturally literate allies, using their influence and connections put toward creating an economy of interdependence to replace the commodifying economy of maskless rugged individualism. The Field Guide is designed to help communities of faith engage intelligently, understanding their local context with their local economy, working across race, class, and neighborhoods to create economic justice and bridge the racial wealth gap.

Once that realization is reached, work fixing the system can begin. We believe the first thing to do is identify a system entrepreneur.

This is the definition from the Field Guide: Sometimes called a community quarterback, the system entrepreneur is a code switcher who understands power and the role of capital, whose goal is to move the whole ecosystem forward. Because it is one step removed from direct impact, but instead catalyzes forward progress at multiple points in the linked ecosystem, this role is hard to secure without a visionary funder who can think systemically instead of looking at discrete projects. Yet David Erickson’s research from the Federal Reserve has shown that this role is the key to transformative change in local economies.

The system entrepreneur is a connector, conversant in marginalized communities as well as talking to mayors, bankers, foundations, and congregations. They make the connections that move the ecosystem forward, but they are typically not the CEO or Executive Director of any organization. Instead, they play between organizations, partners, stakeholders, and allies. You may get lucky and have a member of your congregation or in your larger community who can fill this role, but more often successful ecosystems find innovative funding for just the right person to do this work.

Because their work moves the whole ecosystem forward but is less tied to any direct impact by a straight line, it’s a harder role to get funded than someone working directly on a single project. But when it’s funded, the impact is catalytic.

We hope to have some entrepreneurially oriented cohorts of parishes working with the Field Guide, finding their own system entrepreneurs, to engage with their local economies fairly early in 2022.

In Indianapolis, we discovered a new and amazing tool that people using the Field Guide will want to use, we believe. It’s called the Neighborhood Economic Vitality Index. It makes social capital in a community visible.

Using the NEVI resulted in the lowering of mortgage refinance rates in marginalized Indianapolis neighborhood through visible social capital and resilience enabling lenders to see the neighborhood as less risky. I think a lot of congregations working with communities will want to use it as they work across race, class, and neighborhoods. And that the communities they work with will find it useful as well.

While we are excited about that tool, it is only one of several we are stitching together to plug into the Field Guide and help people learn to use it, hopefully in groups working on similar issues. We will be adding other tools as we encounter them to enable faith communities to engage in their local contexts.